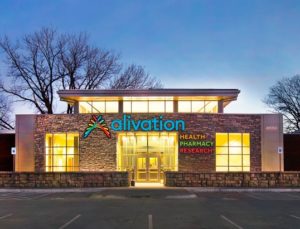 It says Premier Heights on the circular road into Alivation—a remnant of a time before now. Emails still come in addressed to Premier Psychiatric, as do letters or phone calls and the like, and if you search Google you can find reviews for a clinic that technically doesn’t exist anymore. They’re all told the same thing: it’s Alivation now. The facility changed up, rebranded and expanded in 2017 to become what it is today.

There’s no brainchild without the brain, and this facility leapt from Dr. Walt Duffy’s. He founded Premier Psychiatric in 1998, and since then it’s grown exponentially. His family is on staff: wife Rosalie is an office assistant, and their children Will and Grant can be found plugging away in offices in the ground level, in offices adjacent to the IT department, across the hall from the CEO, and only a hall-walk from People Resources.

The building is new, and the walls need more artwork as a result. It can be easy to get lost, as everything looks alike at the moment. Kylie Ensrud, the People Person (HR), has been tasked with finding wall art to decorate, and she has her work cut out for her. Everywhere are signs the facility is young, but as the Duffy’s have learned over the years, growth can be sudden, unexpected. Blink and change will happen.

Alivation is made up of four entities: Alivation Health, LLC, the clinical services, Alivation Research, LLC, Alivation Aesthetics, LLC, and Alivation Pharmacy, LLC. They all work together, distinct LLCs but synchronized and integrated. If you walk down the halls you see their staffs interacting all the time, holding doors for each other or patients, having lunch together in the shared breakroom, or maybe just laughing as friends. There is structure but not hierarchy. Dr. Duffy, always busy with patients, is a frequent sight roaming the halls, on missions. Need a chair or a desk from storage? Rosalie can hook you up.

Alivation’s motto is “Next Level You”, but there is less sloganeering than you might think for a newly-minted outpatient facility. All the staff live by that motto here, but autonomy is prized, the ability to do your job to the best of your abilities and set your own loads or schedules. That’s more than sufficient, so dedicated are the staff to their duties. It makes inspiring hope and creating new possibilities that much easier. That sort of atmosphere, one of independence and ability, flows from CEO Trevor Bullock. He believes in it, and it makes others believe in it, too.

Given this burgeoning culture and the changes associated with rebranding, the difficulties of all those name and stationery changes, the question becomes why do it at all? The biggest reason is the kind of problem that’s good to have: success. Premier Psychiatric proved wildly successful in its almost twenty years of life. Purchasing new facilities and starting research and pharmacy divisions was a natural outgrowth of this success and was a way to cater to patients directly and do everything in-house. We just prefer control—it makes for better service. You can receive a script from a doctor and have it filled just a few feet away. The old problems of driving across town for separate but interconnected services do not exist in Alivation.

The research division is one of those fascinating places filled with quiet people always thinking. If you ask them, they’ll tell you what they’re up to, what they’re interested in, and what other facilities across the world are doing. If you press them, they’ll be happy to go into great detail about their research and will subtly reveal the great passions that drive that sort of thinking for tomorrow’s world. There is both an urgency and an excitement that permeates the talk. You won’t escape without learning something new.

One of the outright cooler features of the facility is the use of dry erase walls. Most offices, and the main conference room, employ this system. It is simply a wall painted with dry erase board material, and it matches the rest of the room you’re in—you don’t even notice or think anything of it until someone uncaps a dry erase marker and begins graffitiing their thoughts, or drawing charts, or listing facts and information right on the wall. Staff often leave humorous messages in other peoples’ offices (that might be the best perk of the system). It’s much more convenient than conventional dry erase or chalk boards and allows the free flow of thoughts from people who have many of them a day. There is no time to be limited in expression.

All these facets brought together form Alivation as more than just a clinic, or even a company—it’s an idea. The idea of doing better, of not being afraid to trip over your own feet running to the exciting future. It’s a facility driven by passion, which has carried over from the Premier Psychiatric days, and everyone who works here shares that sort of vision and believes that the betterment and increased well-being of people will be developed and implemented by people. Like the company, these things are intertwined perpetually, and they work in tandem. It’s right there in the name: Alive + Innovation = Alivation.